Priyanka Fernando has been provided with political immunity stating his threats were not a crime. Please read our statement carefully and join us in campaigning against this decision. 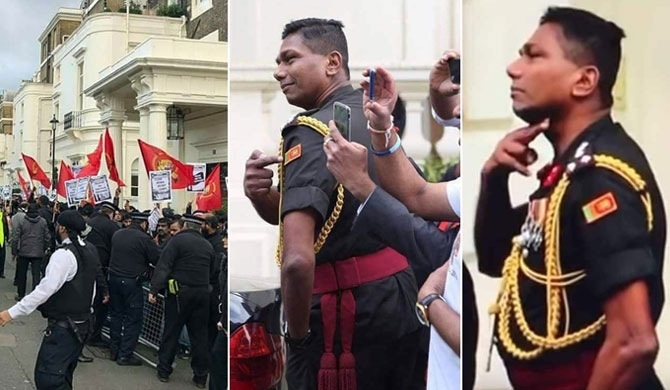 We are very disappointed with the decision made by the British High Court regarding the criminal case against Sri Lankan defence attaché Brigadier Priyanka Fernando.

British High Court allowed the appeal and overturned the verdict made by the Westminster Magistrates court. Priyanka Fernando who was acting as the Minister Counsellor for Defence at the Sri Lankan High Commission in Britain, gave death threats to the peaceful protesters by making a throat cutting gesture at them on three separate occasions. It was taken as a horrific warning given to the protesters as it was a direct reference to how some of the killings took place in 2009. Protesters were outraged and some feared for their life and the lives of their relatives in Sri Lanka. Sri Lankan authorities have a proven history of committing human rights violations.

The Tamil community in Britain and across the world, who have been fighting for justice to the genocidal slaughter that took place in 2009, were further angered by this incident and demanded his immediate arrest and action to be taken. However, he was allowed to escape back to Sri Lanka, where the Sri Lankan authorities had given him a hero’s welcome and promotion.

Since the incident had taken place in British soil, the matter was taken to the British courts. Initial verdict by Westminster Magistrates court found him guilty. Immediate demand of the activists to release an arrest warrant was ignored, as the appeal was launched with the aid of the Sri Lankan government citing that Priyanka Fernando had ‘diplomatic immunity’.

This decision came at a time where the British government voted in favour of passing the resolution proposed at the UNHRC on accountability and justice in Sri Lanka. In the debate held in the UK parliament, members from all the parties had condemned the ongoing human rights abuses in Sri Lanka. But words alone are not enough as not a single action has been taken so far against the war criminals of Sri Lanka. No action has been taken even when they committed crimes in Britain.

We undersigned do not accept that no action can be taken regarding Priyanka Fernando or other war criminals. We demand the following:

1. Cancel the diplomatic immunity of all war criminals immediately. War criminals and those who committed crimes against humanity should not be given government protection.

2. No entry to war criminals. They must be arrested on their arrival and tried for their crimes. It is in our right to make a citizen arrest if no such action is taken.